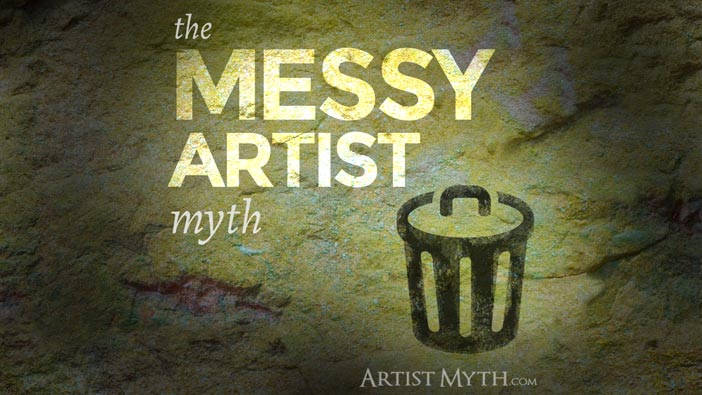 This is the third in a series of posts called “The 12 Artist Myths” that explores the most common widely held beliefs people have about artists and creative individuals of all types. It also represents beliefs that we artists have about ourselves that hold us back from reaching our fullest potential.

One of the most popularly held, but often erroneous, beliefs about artists that they are messy. In extreme cases, it is believed that they actually need to be disorganized in order to squeeze the maximum amount of creative mojo they can out of their unkempt brains.

Before I go about busting this myth, I ask you: where does this belief come from?

Origins of the Messy Artist Myth

This thinking may stem from the ancient Bohemian ideals that gave many of the 18th century Romantic-era artists their identity. This is well documented and the vein of the “messy artist”, like the “starving artist”, runs through much of our literature and cultural artifacts.

Another reason could be that in the process of making art, supplies get mixed, spilled, sloshed, and splashed. Even a brainstorming session between writers can leave a churned up path of metaphors, cultural references, and bad puns. Film editing left parts and pieces of film on the floor or in various bins. So you could say that the very act of creating, which includes coming up with ideas, testing them, and quickly discarding them for new creative bits, creates a mess.

Many people think that an artist who is completely and utterly devoted to their craft wouldn’t be concerned with such menial things as organization. After all, wouldn’t the time it takes to clean up be much better spent making art?

But while there is a lot of truth that the creative process itself could be called messy, one thing should always be remembered:

The mess doesn’t have to be within the artist.

That internal mess is what so many artists, and others, get confused about. People think that creativity has to come from a chaotic place, and so artists by their very nature have to be chaotic people. But all too often these misconceptions have self-injurious consequences, and such artists may be characterized by:

What is on the inside quickly spills to the outside, and the artist’s life and studio can easily become an unproductive wreck. Not only is this bad for the artist, but it’s also bad for the poor people who live with them. Messy Is Not A Requirement

Disorganization is not a prerequisite to creative genius. This is a classic misunderstanding about correlation vs. causation. Just because some artists are messy, and even famous ones may claim that it helps them make their art, that doesn’t prove that it does.

In fact, you could make the case that the opposite is true: that organized artists who keep a clean workspace as well as a clean thought process are in a better position to create better work…and create more of it.

“I believe I can execute and produce in any environment but I must have order and organization to do the mental work involved in creating art. Chaos and disorder would disturb my concentration or peace of mind and make it difficult for me to imagine, conceptualize and write.” – Nadege Morey, New York Collage/Assemblage

While many artists can create in a disorganized environment, we will probably do better work when we have our workspace designed in such a way as to facilitate creative actions and focus creative thoughts.

An Exercise: Mess vs. No Mess

Think about this scenario: let’s say you have an important task you have to turn in the next morning. You estimate it will take about four solid hours of work to do it. But you haven’t started it yet, and you have to gather a number of materials in order to start the work.

Now imagine yourself going into a messy room to work in. What thoughts cross your mind? You may believe that you have a practiced thought process that instantly disregards the mess and allows you to go on with whatever you were going to do. But if you stop and really think, you may be saying to yourself:

If this does happen, then the mess is probably taking precious mental cycles away from what you’re really trying to do. The next thing you know, you’re knee-deep in stuff, trying to find what you misplaced. Or you’re shuffling around papers on your desk. And you forget what you’re supposed to do in there in the first place.

The result? The next day, you sleepily turn in a half-done piece of work that you know could have been done better.

What if you had gone into a workspace that was neatly organized and you knew where everything was? Even better, what if the materials you needed to do the assignment were already gathered in the middle of the room or your desk, and nothing else was around to distract you?
Do you think you could focus better, spend more time doing work that mattered, and feel better doing it?

Setting the Stage for Success

The happiest, most productive artists are not necessarily the most talented. (That’s another myth.)

They are the ones who put themselves in a position to be the most successful.

They give themselves permission to succeed by setting the stage first, giving themselves the best opportunity to make great art. In doing so, they remove distractions, set aside time for the work, and prepare their materials before actually working.

Does it take time for you to do this? Time that you could potentially use to make art? Of course!

But the time it takes to organize your workspace (especially if it’s a routine and you already have a place for everything) is small compared to the time that you will waste from trying to look for things that you don’t know the locations of. Or from staring at a dozen half completed projects that are lying around your studio or office.

Furthermore, the time you spend organizing is not just helping your physical space… it’s helping your mind as well. It’s organizing your thoughts, giving you closure by putting away things that you know you don’t need, and getting your mind ready for things that you do need by putting those in their place. Then you can focus on what you’re really there to do: innovate, create, and produce lots of great art.

Is it worth trying for yourself?

Please share your thoughts below in the comments section.

I appreciate your honesty and openness… and wish the best for your creative pursuits (even if it means ‘cleaning house’ a little bit!…)