How Artists Should Think About Money (The Parable of the Stream) 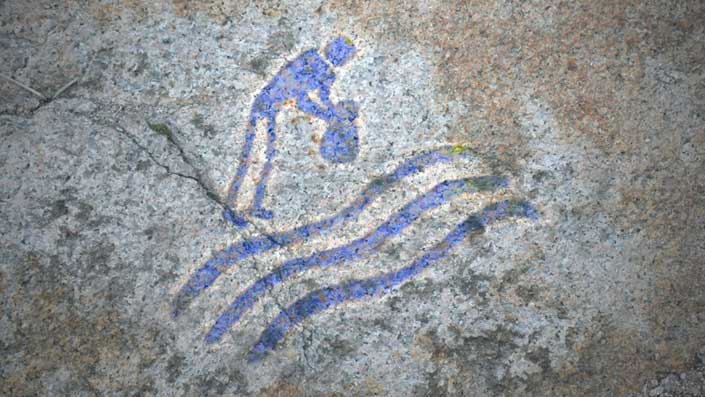 How do you think about money?

You are not alone… plenty of creative people just like yourself are in the same situation.

The answer lies more internally than externally. In other words, we will need to change something about ourselves rather than expect outside forces to make our lives better. And the root of fixing ourselves internally is the way we think about money.

The Parable of The Stream

There was once a man who lived near a stream. Water was scarce, and this little stream gave life to a lot of people.

But there were problems.

For one thing, you could only access the stream at a certain place, and people were always crowded around it getting water. There were “gatekeepers” that only let people get water at the stream after they paid something. So each day, the man would wake up and go to the stream, and pay for a few cups of water that he could take to his family.

Well, he was getting pretty tired of doing this. His family was growing, and he needed more water than he could comfortably afford. So he sat down by the stream to think. He watched the throng of people at the stream’s edge who were negotiating and doing their business.

His eyes strayed away from the teeming mass. There were a few people that he had never noticed before a little bit away from the main group at the stream. Curious, he walked up to the nearest one, an older man who was hunched over a small hole in the ground. The man had a cup in the hole, waiting patiently while the cup slowly filled up with a tiny trickle of water that was coming from the stream.

“Sir, I see that you have found a way to get water without having to go to the stream,” he said to the older man, “but why don’t the gatekeepers stop you from eating into their profits?”

The old man glanced upward and chuckled. “Son, this is such a small amount of water, they don’t care.”

The man continued. “Sir, if you don’t mind another question…why don’t more people do what you are doing? It seems like a better way to get water.”

The old man squinted, in deep thought, then replied, “I guess because they don’t know how, or they don’t want to wait for as long as it takes to fill a cup from this little trickle.”

The man decided he would find a little trench of his own. It took a lot of searching… but finally he spied a tiny trench in the rocky ground. At the bottom of that tiny trench was a small rivulet of water. It was too small to dip his cup in, so he bent down and drank the water right out of the trench.

He sat up and blinked in surprise. It was just as good as the water in the stream!

He bent down to examine the little trench again, expecting the water to be gone. But there was still water in the trench! He realized that the tiny trench was constantly being fed by the stream, and although he drank from it a little at a time, the water would never run out.

He realized that in order to get his cup down there so that he could take back some water to his family, he would have to dig a hole in the rocky ground. This hole would be filled with the water from the small (but endless) trickle.  He didn’t have anything to dig with, so he used his hands. It was hard work, but he finally managed to dislodge enough so that the hole was a little bigger. He still needed water to take home, so he paid the people by the stream for a few cups and went home.

The next day, he woke up excitedly and returned to the stream. He continued to dig. This time, he dislodged even more rock to make the hole a little bigger. It still wasn’t enough to get his cup in, so he paid for water and returned home again.

He continued in this way until the hole was finally big enough to put his cup in. He was able to partially fill his cup from the trickle, and didnt’ have to pay as much to fill it the rest of the way from the stream. What satisfaction he felt! He didn’t have to pay for as much water this time. They could use the surplus for other things that his growing family needed.

Eventually, he finally got the hole big enough to put his entire cup in, and didn’t have to pay for water from the stream, only occasionally when they needed an unusually high amount of water. (Like when it was time to take their annual bath.)

This little parable, as silly as it is, contains some hard truths about money that are worth paying attention to.

The largest (at first, anyway) and most regular source of income is going to be at some kind of institution or company. You will need to pay with your time in order to get the revenue that you need. You may value your time, or you may not. There’s an interesting thing about time… it’s the only resource that you can’t get back. You can always earn back money that you’ve lost, but you can never get back time.

Where the largest and most visible sources of money exist, there will always be gatekeepers. Whether it’s large artist grants, internet job openings at famous companies, or a freelance posting with a Hollywood film, the larger and more famous a posting is, any artist is going to have a difficult time of getting past those put in place to weed you out. I’m not saying it’s impossible to break into these areas, but it’s very difficult. You nearly always will need to play the game their way, and by their rules.

There are people who don’t do things the way the mass of people do them. It may take some looking, but you will find them, they are out there. And when you treat them nicely, they may share a secret or two of their success.

The Trickle and the Hole

The trickle of water is your own personal passive income stream from your art. It may be:

While smaller and difficult to dig, a streamlet of your own is worth making… and it takes patience and persistence. But eventually as the hole gets larger and larger, you have to rely less on the main stream where the gatekeepers are, and you can do things on your own terms.

Are you ready to think outside the box? Begin finding your own little streamlet today. Figure out what you can bring that you can sell directly to people, a small thing that you can test and see if it works. Then, if it does, you can expand your little income stream larger.