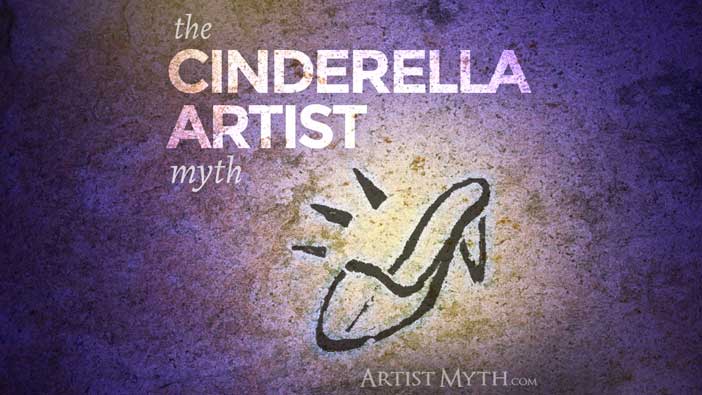 This is the second in a series of posts called “The 12 Artist Myths” that explores the most common widely held beliefs people have about artists and creative individuals of all types. It also represents beliefs that we artists have about ourselves that hold us back from reaching our fullest potential.

Remember Cinderella? Who Can Forget Her Story?

The animals all loved her. They even helped her get dressed each morning as she sang to them. But they were the only ones who knew about her talents… her mean stepmother and stepsisters were determined that she would remain a vassal all her life.

Then came the day when her fairy godmother materialized out of thin air, wand ablaze, bestowing possibility and certain success.

This is great fiction that has been retold a thousand times, and its mythos runs so deeply in our culture that it’s a part of our vernacular. People often refer to the “Cinderella story” when they talk about overnight successes, referring to anybody from prize fighters to pop stars.

The trouble with the Cinderella myth is that it completely externalizes the success factor. It depends entirely on someone other than the protagonist. Because the naked truth of the story is, while Cinderella was pretty and had a good voice, she didn’t do squat to attempt to change her situation. The implication is that if Miss Bibbity-Bobbity hadn’t shown up when she did, Cinderella would still be happily tweeting and scrubbing away in a dark corner of her cellar, unknown and unfound.

Good Story – But Not Good For Business

Somehow we find it so easy to cling to the idea that, even though we may be locked in a tower, someone or something will eventually come to our rescue.
We believe that somebody will discover us and lead us out of our poverty-like state.
Or, our ‘rescue’ that we fantasize about may be in the form of some kind of divine artistic inspiration, that we can sit around in some kind of fog and wait for that inspiration to arrive so we can feverishly begin the magnum opus it dictates.

You may have heard your own internal Cinderella saying things like this:

There is a thread of hopeful procrastination running through all of these examples… the idea that we don’t have to do anything, or even have much talent or work ethic, and in spite of that we will be granted wild success.

Our creative output then becomes somewhat of an empty act, something to bide our time while we wait for the ray of sunshine to burst through our dingy basement. Because if it’s all about that special person or disembodied magic who finds us, then it’s not really about us, is it?

Is that what being an artist is all about? The Myth of the Magic Talisman

Sometimes our “Godmother” takes the form of a gadget, a piece of technology, or a tool that will provide the boost we need. It’s easy to become enamored with the latest paintbrush or software that we think can make all the difference in our career. That it will give us, in the words of the lovely Ms. Potts, that magic something that wasn’t there before.

But this is also externalizing our success… and dooming us to chase the latest innovations peddled to us by the cottage industry around all art professions. Don’t get me wrong, I’m all about using the right tool for the job – but I have known people who put the majority of their emphasis on acquiring these “magic talismans” in a never-ending quest for betterment. A pretty price is paid on this quest… time spend troubleshooting the latest buggy release of a brand new software, money spent of acquiring it, and the opportunity cost of time lost. If you spend more time and energy on upgrading the best tool you have, your own artistic brain, you will see a much more dramatic return on investment.

The Deus Ex Machina Myth (God From The Machine)

There is another phenomenon which is actually much older than the Cinderella story. It reaches back centuries to the age of the ancient Greeks.

When writing plays, authors would often employ a plot device to “save the day”, and wrap up the story in a convenient way. This often involved using machinery to lower a god-like figure from above the stage or raise one from below the stage who bestowed rescue on the hapless protagonists. It came to be known as Deus Ex Machina… which translated, means “God From The Machine”.

It didn’t take long for critics to catch on to this tactic, which they felt was a lazy use of an external plot device to wrap up a story. Aristotle himself was one:

“It is obvious that the solutions of plots too should come about as a result of the plot itself, and not from a contrivance…” —Poetics, (1454a33–1454b9)

So if we were to step away and look at our own story more objectively, wouldn’t it be a much better “plot” to resolve the problems ourselves, rather than wait for some outside contrivance which may or may not come?

I prefer the more active role of an artist. One who hustles for his bread a little bit… somebody who’s not afraid to get out there and tell people about her work. Somebody who can feel the self-satisfaction of having done a little honest-self promotion in order to get out there in front of people.

Would you prefer to take the reins of your creative business in your own hands and step down the path of your choosing, or would you rather wait for a Deus Ex Machina to pop up someday and lead you to creative success? I’m Bill from Pittsburgh, here to rescue you!

The Bad News: You Won’t Be Found.

Here’s the bad news: for those who choose silence and hope, there is really not much hope. Because things have gotten very, very noisy. There are people clamoring for attention right and left, and the person who doesn’t join in the din will not be found. While this may have been true in the past, and people like Vincent Van Gogh could luck out with a person like good old brother Theo at his side, nowadays it is very unlikely.

Take the music industry as an example. Many artists hope to be picked by a music label, which in itself is a very slim chance. But even if you’re selected by the label and produce an album, 98 percent fail in the marketplace. Of the two percent that remains, less than one half percent will ever see a royalty check.

Nobody will pick you. So pick yourself. – Seth Godin (The Icarus Deception, Chapter 12.)

The GOOD News: It’s All In Your Hands

The good news is that it doesn’t take much to make sure you’re found by the right people. A website, a consistent and persistent social media presence, and the right targeting to the right kind of people will get you far. (This, of course, assumes you have talents and abilities that people want.) And the only way to find that out is to put your work out there, get feedback, and continue to improve as an artist and communicator.

There are a lot of avenues for self-promotion and selling your work. To take the music industry as another example, an artist who sells two songs self-published on iTunes makes more money than they would earn from a record label from selling a single CD for seventeen dollars. Due to our new democratic media revolution, more artists are making more art and earning more money – by selling it themselves.

Yes, it’s hard work. It takes continuous learning and persistence. But it’s much better than scrubbing pots and pans, isn’t it?

Plus, you get the self-esteem boost that comes from pulling yourself up by the bootstraps and seizing your own destiny.

So stop waiting for:

Because while there’s a sliver of a chance that it might happen… it probably won’t.

So get out there and make it happen.

Please share your thoughts below in the comments section.

Don’t be afraid to tear up the story you’ve been living… and rewrite it with YOU as the hero.